April 2010 - A physical copy is in my hands.  That's gotta count for something.  Well, we're at the end now, but I'm finishing up the final edit of the proof.

It's weird, though.  As I'm also re-designing the covers for 12 Stories and Code-47, I kinda don't want to release A Company of Moors until everything is complete.  But, that ain't gonna happen.  ACoM will be out ASAFP.  12 Stories' massive edit overhaul will be the rest of the year's project.  Cover coming along fine.  The new cover will be featured in ACoM at the end, advertising.  So will Code-47.  It doesn't need any more editing, but a new cover is in order.  That will be ready soon.

I Have Not Abandoned You

Quite the opposite.  I have been working hard.  I have been cruising through the last go through of A Company of Moors, re-applying the edits with a hardworking team.  Also, this past weekend I started the re-construction of 12 Stories High, starting with its cover.  I initially started working on a new cover for Code-47

.  Wasn't liking the designs that were being come up with.  I started fiddling around and suddenly the cover for 12 Stories High started taking shape.  It looks amazing.  There's still some touching up to do.  I went for a 'classic' approach, a re-release with a cover that makes the book look like a timeless classic.

But, A Company of Moors is still at the forefront.  The last story arc is being read through.  The edits will be applied and then one last print out, a read through, submission, and BOOM!  We got the book.  I will jump to the 12 Stories High project immediately after, while promoting A Company of Moors.

I am enjoying A Company of Moors.  I'm getting to know the characters in a different light.  A lot of the worries I had about the transition from the first and second story arc are gone.  The story runs smoothly, and a prominent character doesn't fade into the background as much as I thought.  Also, the story is cohesive, and reads very well.  I'm just hammering out some of the few rough patches.  It looks good.  Can't wait for you seven people to read it.

Season 1, All Over Again

The proof for the book is being looked through in much the same manner as the manuscript.  Every 150 pgs or so is clocked as a 'season'.  Season One has been finished.  There weren't many glaring errors, or typos, but there was a sense to smooth out the language.  The story has such a poetic flow that rough patches have to be ironed out, and that's what's happening.

I think the 1st 154 pages always had it the hardest anyway.  They were written when I was still trying to get a handle on the story, and, of course, going through moves and stress at the job.  The later chapters were seen as easier to edit, most likely because I was more settled, back at home in New York.  There are also things that can be caught better when the manuscript is in book format.  It's a proof, yeah, but it's a physical book.  When you read it, you're trained to believe that there won't be any mistakes, so they seem more apparent when you come across them.  Makes it easier.

Haven't had much time to go through it, but this week will see more time spent on the proof.  I am applying the first edits before moving on.  When all is said and done, and the 2nd proof is in my hands and looked through (hopefully perfect), this project will be on the shelves.

It's just the proof, but I'm excited to hold a physical copy in my hands. My fourth book. A Company of Moors. Comin' soon. Just one last sweep through the text. Cover will be re-worked and there are some text changes. Lookin' for typos, sweeping the book's interior for mistakes. 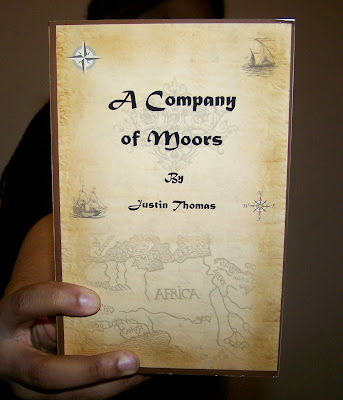 Welcome to al-Mari Ifriq, a small city dreaming of its borders to reach the coast.  Its dusty, unpaved roads and small districts set the unofficial borders, providing reminders of the minor squabbles initiated by surrounding maritime companies that vie for control of each other, the city, and the entire region of Odongo-Mauharim.  Thus sets the grand African tale of Moorish Company Bosses, corsairs, and kingdoms involved in all manner of legitimate and illicit politics.

Join the adventure of three African states.  The first, a city ruled by corsair politics.  The second, a Kingdom on the brink of war.  The last, a nomadic nation marked by Europeans for enslavement.

The proof has been generated and I've seen a glimpse of the cover.  It's almost perfect.  Some things are just a li'l off center.  Not a problem.  It can be fixed.  This time, however, it won't be free.  But, I am excited.  It looks clean, good.  I do have to see what it looks like in my hand.  I should be receiving the proof come next week (hopefully early).

Well, I Asked For It

And when you ask, you shall receive.  I asked for trouble.  I received.  I thought there was going to be trouble with the cover and there has.  The math for the width was all types of off.  It's hard to compensate for the spine width along with bleeds, and the actual width of the book.  The program I have does all that, but...you do need to do some thinking.

Nothing can compensate for being human.

So, it's been a back and forth.  And the printer & distributors have been very patient.  So, here's to hoping all the math is correct.  It really wasn't as difficult as I imagined.  I thought I would have to start all over again in terms of building the cover, but all I had to do was enter the properties of the book into the program, adjust the pictures on the front and back cover, and BOOM!  It's all good.

Well, at least I'm in the middle of it.  Anticipation is the worst.  It's worse than actually being in the situation.  Of course, if there's a time to get it wrong, it's now.  This ain't costin' me.

I will receive word today about the book.  I'm most worried about the layout for the cover (as i constantly keep writing about).  If the cover looks fine, I'll be exited.  Once I get the proof, if there are things that need to be corrected with the interior, I won't be upset.  It's all about the cover and what it looks like in book form.

It's just that it's so hard to re-arrange the layout, and there is so much time before fixing it and seeing what it looks like (again) in physical form (not to mention costly with each correction).  That's one reason why the lettering for Code-47

isn't centered.  I was scared the lettering would get cut off because of not taking into account the bleeds.  It was hard to work with because the cover was all black.  But now I have a better grasp of the book cover program I was working with.

At least I hope I do.

This Is Where The Fun Begins

I submitted the cover and interior to the printer.  I have paid for a proof, and now I will sit back and wait for the back-and-forth of revisions, proofs, more money spent, and a final copy that I can approve.  Did the math on some deals, wasn't much.  So I opted out.  It was cheaper for me to go with the actual costs than commit myself to nonsense.

Now it's time to make calls to distributors and tell them I have a new book on file, sign some papers, and keep it movin'.

Checkin' with my sale's rep about submission deals before I submit anything.  I just want to know some options, not just the cheapest, but what options would be better for me.  This is a business, afterall.  At least this side of things.

Changing the Face of Black Literature

This will take every ounce of my not inconsiderable knowledge.
Posted by J. Thomas at 4:16 PM

The manuscript is immaculate...hopefully.  But all is said and done.  What problems are not caught now will be seen in the proof, corrected, and then applied for another copy.  I will send the manuscript to print come Saturday.  Butterflies are again dancing in the belly.  My biggest worry is how the cover will look in the final layout.  I hope everything is aligned.  Cross fingers, toes, eyes, and streams  (Ghostbusters