With all paperwork squared away, Twin Griffin Books is now official! There are different variations of the logo (colors). This is just one variant. The books already published will be refitted with the new logo and website information, and ported over to the new company. 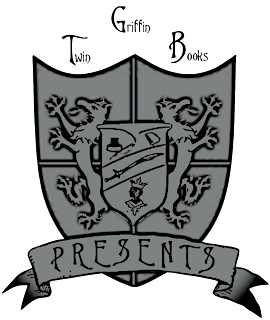 An emotionally charged third act, especially the third chapter of it. It's entitled 'Narrative Circumference', as the story comes full circle. The protagonist puts the pieces of the puzzle together by contrasting lives that parallel one another. Drained me, and I haven't finished the chapter yet. Had to take a breath from it. There are areas difficult to write. Not emotionally, just trying to pick the right words to capture a rough life, not gloss it over even when their comes a faint glimmer in its darkness. It's not too gloom and doom, but I don't want to have it be washed away with a smile and a bright day and say, "And everything's better now! Yeah!"

But it does have a bit of mystery as the main protagonist has to compare lives and label each of the characters he's met appropriately. At the beginning of the third act, the protagonist comes in contact with the main antagonist, and he knows more of her than she knows of him. Well, at least he suspects, again, it's by the third chapter that the protagonist has to examine his 'notes' and put things together, but he's not really interested in the villain by this point. Another character he meets holds his interest and is a larger key in the picture he's putting together. But all the stories coincide.

In otha newz, act one was returned to me with all its notes in red ink. Not as bad as I thought. I traded it for the second act. It's not a grand epic like A Company of Moors, nor is this project a series of stories with starts, middles, and stops that can make for an emotional herky-jerky ride with new characters and their drama like 12 Stories High. So this short story, which is over two hundred pages and counting, is going quick.

Also, hopefully all paperwork will be squared away by next Wednesday when it comes to the 'new' business side of things, so the name and logo can be revealed sometime next week. A commercial is being put together. All trailers for books on social networking sites will be taken down by week's end, and have already been taken down from Ancient-Art-of-Facts' youtube channel. The website should be on display by April and a reveal of title and book cover for this project and a project due out in December will be presented.

That's where we at. Looking for mid-March as a finish time for the project. All edits applied and the first printed proof in April. A second read through, print up by May, third (and hopefully final) read through and an August release. Sprinkled in there will be a synopsis of the project and some teaser commercials.