12 Stories High has a new cover! Same stories! Some stories have a tie-in with The Fable Avenue Saga™ (more on that later). 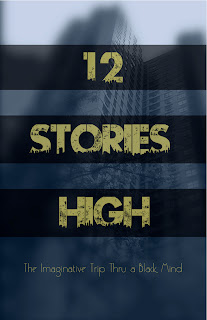 I'm happy to announce that both Code-47: Memoirs of a Hip Hop Heist and The Ghost of Gabriel's Horn: Prologue to the Fable Avenue Saga are now AVAILABLE ON AMAZON KINDLE!!!!!! 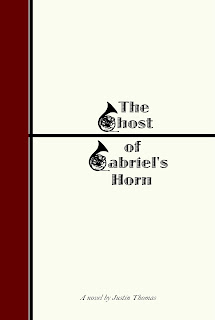 THE GHOST OF GABRIEL'S HORN: PROLOGUE TO THE FABLE AVENUE SAGA 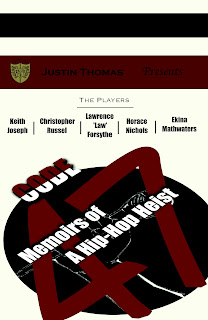 I’m presenting a respectful amalgam of African and African-American folklore wrapped in a unique culture. I take some liberties so as not to be bogged down by definition, but great respect is paid to the concepts I’ve used as inspiration. This culture isn’t hidden, either. It’s right out in the open. There, on a fictional street in Brooklyn, New York. Fable Avenue. The Ghost of Gabriel’s Horn was written for the readers of the Fable Avenue Saga™ to gain an understanding of what went into securing this wonderful, black culture.

We will learn how the culture on this street operates. We will learn their system of rites and rituals. Who are their matriarchs and patriarchs—elders? What is their belief system? What opposes them? From The Ronin Poetz to A Company of Moors, I like presenting culture, expressed in one way or another. In The Ghostof Gabriel’s Horn, I set one up. It looks disjointed at first, until the audience discovers how everything is tied together. And there was a lot within The Ghost of Gabriel’s Horn that served as clues for what’s to come.
So now, we have this mystical black culture. Within the pages of the prologue for the Fable Avenue Saga™ I’ve presented the physical origins of this black culture as a street in Brooklyn, and from there, the Diaspora of black folklore around the world. To make this culture authentic, I’m looking at the stages and rites within different African mystery systems found anciently throughout black kingdoms in and outside of Africa, and I’m putting together a culture that represents these aspects symbolically. This is all to get the feel of the culture. It’s not the focal point of the series. The culture validates the people and characters we get to know, and whose journey we follow, throughout the remaining chapters of this saga, and, as well, the people validate the culture, their culture.

When creating this culture, I didn’t want to look at a concept like the Legba family and say, “I’m using that!” Instead, I studied the makeup of the folklore, the mythology, and asked, “How does this operate?” and take from that. Once that answer came to me through research (research, research, research, and research) I then understood how certain aspects of this culture would function without simply copying and pasting.
Taking respectful, creative liberties gives me the freedom to present this authentic, black, magical culture. Inside this universe there are wonderful characters, contemporary and historical, and they validate the atmosphere of this grand story.

One thing I like is that the main character is born into the culture. He doesn’t have to be introduced to it. The main female protagonist is a part of the culture too, but her family has had a falling out with the Fable Avenue community. With her, there are bridges to be re-built. Her grandmother respects the community greatly, but also believes it’s failed her family. I like this in contrast to other stories and heroes such as Harry Potter or Luke Skywalker. They are from wizarding and Jedi lineage, but they’re not born into it. In fact, it’s hidden from them until the proper age. As I’m outlining the story, I’m realizing that I like dealing with characters that have already been a part of a culture. It cuts down on a lot of exposition. There’s still stuff to explain, and familiar tropes to travel, but we start fresh by stating, “Look, these characters know most of what’s going on.” Even still, a mystery prevails, that no one of the culture is aware of; questions that need answering, and as can happen, many of the Elders have their secrets. A lot can happen in fifty-seven years from the end of The Ghost of Gabriel’s Horn. The rest of the chapters in this saga will take place in contemporary times.
The Fable Avenue culture is fifty-seven years strong. Unified under African, ancestral concepts. But there are diabolical forces that want to tear it apart like Set did Osiris.

Chapter one is complete. Let’s say, it’s in the books (sorry, couldn’t resist). At 11:50 pm, May 7 the first chapter of this new project came to a close, and a quick few sentences of the next chapter were written. This chapter was heavy, and it took a while to compose and get all the parts moving fluidly from scene to scene. There were moments where the transition from point A to point B could’ve gone wrong. Writing this chapter had to be done carefully. I had the same challenge I encountered with the first chapter of The Ghost of Gabriel’s Horn (i.e., in terms of making the chapter have a fluid, forward motion while properly tying together a group of concepts that aren’t always group together when it comes to storytelling).

Imagine a lot of pacing and staring at the screen.

I had to make certain that I was drawing out the proper emotion, especially when composing the second scene of the first chapter. I took it slow. The goal was to make each segment of the chapter blend seamlessly with the next. Writing-wise, it was most difficult at the beginning of the chapter. I’d written the first two or so pages in early April when inspiration just hit and I couldn’t wait until the end of the month. I had some down time. I liked what I’d written as a rough, rough, rough, rough draft to piggyback off when the proper writing began later in the month. After my birthday (Thank you, thank you. You’re too kind) I copied and pasted the scripted pages in the proper document for the project, and at first, I kept going back to the early pages and editing them. On one hand of editing, I just wanted to make sure that certain words weren’t being used over and over…and over (and over).

Also, I needed the transition between the beginning, an interior (point A) to an exterior (point B) and ultimately the second scene, another interior (point C) to feel as if the reader was walking between points A and C, considering there are no characters to take us there. It plays like the opening shot of The Player or Scorsese’s Copa shot in Goodfellas, both of which inspired Joseph Pepper’s entrance into Water Bug Hollow’s Independence Day celebration in The Ghost of Gabriel’s Horn. But here, there are no characters and people aren’t recalling a history. It’s silent. I have to take the reader through a Brooklyn neighborhood from train station to a brownstone, and make it all interesting.

Well, don’t know about the interesting part, but the ‘track shot’ was accomplished. And then we have to move through a brownstone window’s glass pane and peek in on two characters sitting at a table and having a conversation…or rather one character is talking while the other is listening nervously. We know immediately that the person talking is intoxicated. The person is drunk and high, right in the middle of indulging. As more and more information is given about the scene (especially the second person in attendance), I want the reader to be just as nervous as the second person in the scene. But the trick is also to put information (again, seamlessly) into the scene that also draws out sympathy for the intoxicated character, without being cliché. I established the sympathy first, but when we’re made aware of the second person, it’s substituted with worry.

Following the third character through the rest of the chapter again could easily take away from what’s been established. But the proper emotions are brought in, as are more and more characters, ultimately ending with a character that will dominate the rest of the book, though not the main protagonist. All the emotions of the chapter come to rest on this character’s shoulders, and we know that immediately. And we definitely understand this by chapter’s end. It’s not so much the events of chapter one that has the character’s spirits slumped, but the fact that it marks a change. The character’s feelings are based after a quote from the movie Fallen, starring Denzel Washington as Detective John Hobbes. The quote (spoken by Denzel as Hobbes) goes like this:

“There are moments which mark your life. Moments when you realize nothing will ever be the same and time is divided into two parts, before this, and after this. Sometimes you can feel such a moment coming. That's the test, or so I tell myself. I tell myself that at times like that, strong people keep moving forward anyway, no matter what they're going to find.”

The antagonist is also introduced. He makes a simple appearance over the phone asking how things are going. Of course he knows things are shot to hell. It’s creepy. He’s struck an entire community, breaking one of the families living within it. He tells the patriarch of this community that they will always be in his heart. And then he issues a warning and ends the phone call.

As any writer will attest to, the first chapter is the chapter that gauges how you approach the rest of the writing process. It has to be the strongest. Not just to pull the reader in. It’s about the story. You got to be like the X-men’s Gambit. All the potential energy has to be drawn out. It’s got to glow like Bruce Leroy. It doesn’t have to be action packed, but it has to be tight and strong. Again, it’s not just about instantly grabbing the reader. That’ll come if heart is poured into it. It’s about giving a proper introduction to the story.

So, what do we have with this first chapter? We got the potential energy as kinetic, heart poured in. We got the glow to grow. Activate Interlock - Dynotherms Connected - Megathrusters are GO! Flux capacitor is…fluxing… It’s a storm. The rest of this book will be a wave. Get your boards. Surf’s up!